The leadership and staff of the Baltimore-Washington Conference are taking a deep dive on implicit bias, a journey they are modeling in hopes that other congregations will come along, too. 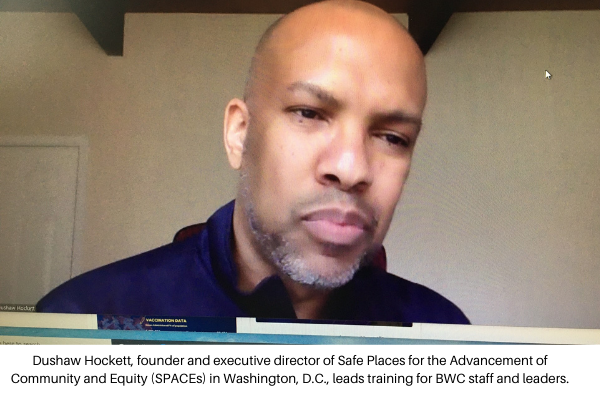 The training, led by Dushaw Hockett, began last month as more than 60 participants gathered via Zoom. This is just one step on the way of building Beloved Community, Bishop LaTrelle Easterling said, a key focus for the BWC in the months and years ahead.

“Part of our leadership team’s role,” said Francess Tagoe, Director of Human Resources and Benefits for the BWC, “is to provide some tools to help us grow, so that together, we can better understand and respect one another.”

Hockett is the founder and executive director of Safe Places for the Advancement of Community and Equity (SPACEs), a Washington, D.C.-based leadership development and community building organization dedicated to bridging the gap between what people imagine and what they achieve.

Implicit bias, Hockett said, feeds an overwhelming amount of harm in our society today. Implicit bias is a “preference for or a prejudice (or aversion) against a person or group of people.” Then, he added, “if we only think about bias as prejudice, we miss a lot.”

“At the core of all of our work,” Hockett said about Safe Places, “is the practice of bringing together people who don’t look alike, don’t think alike, and don’t talk alike, and doing that for the purpose of getting people to see bits and pieces of themselves in others.”

“If we want to move to a much more transformative place, as an organization or a country, around how we deal with issues of difference, then the way forward has to be to marry, to combine, the new and emerging tools with existing tools,” he said. 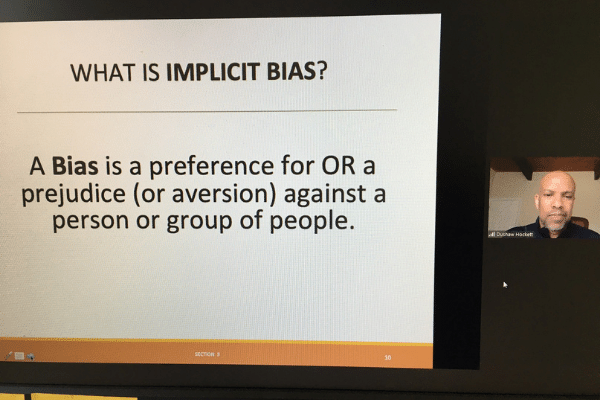 Hockett walked the staff and leadership through five key characteristics of implicit bias:

Hockett also offered several strategies to deal with implicit bias, from slowing down one’s decision making, to “individuating” (taking time to learn detailed information about the “other,” whoever that “other” is), perspective-taking, or walking in other’s shoes, and countering stereotypical images.

In a second day spent with Hockett on April 20, BWC staff and leaders learned that the way society deals with issues of difference “is inadequate and incomplete,” he said. The new strategies center around IDEA: Inclusion, Diversity, Equity, and Anti-Racism.

“The effective practitioner of this work,” Hockett said, “has a functional understanding of the history of racism and other forms of ‘othering.’” And it is not a simple matter of reading books or watching movies and regurgitating facts, he said. “But, instead, he, she, or they use history in service of three R’s: Remembrance; Repair/Restitution; and the practice of Re-Imagining.”

Practicing the strategies he outlined is imperative to transform society, Hockett said. “If we can get people to make these practices a way of life, it would be transformative.” And like the adage of “How do you get to Carnegie Hall,” Hockett said this practice isn’t a one-and-done scenario.

Hockett is already working with several congregations in the Baltimore-Washington Conference, said the Rev. Stacey Cole Wilson, Executive Minister of Justice and Service. Individuals may contact her at for more information.

The learn more about the work the BWC is doing to help build the Beloved Community, visit https://www.bwcumc.org/ministries/advocacy-action/racial-justice/.