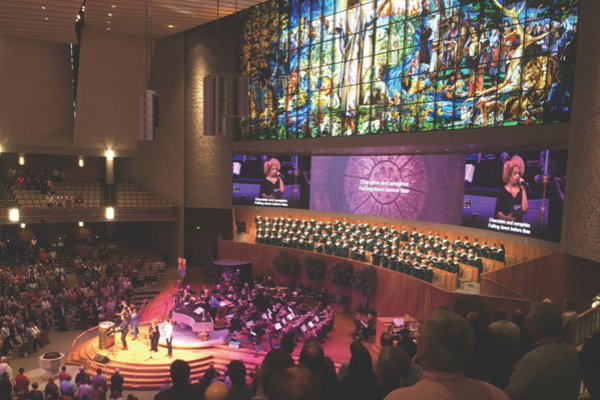 Opening worship at the 2019 Leadership Institute at the Church of the Resurrection near Kansas City featured a full orchestra and mass choir. Photo by Erik Alsgaard.

The central image of the window is Jesus, robed in white, arms outstretched and elbows slightly bent, as he welcomes you to the church. His face – which takes up one of 161 panels that make up the window – is five feet tall.

Those outstretched arms of Jesus welcomed more than 2,500 people in late September at the church’s Leadership Institute. Those same arms may have also welcomed the birth of the next expression of Methodism in America.

A typical Leadership Institute offers advice to church leaders of various denominations for growing their congregations in size and mission work. However, with the church actively entertaining the possibility of a breakup due to longstanding divisions over homosexuality, Leadership Institute 2019 turned into a centrists’ and progressives’ forum for discussion and strategizing about the denomination’s future.

“It’s about: Who are we, and who do we hope to be?” said the Rev. Adam Hamilton, senior pastor of Church of the Resurrection (COR), the denomination’s largest U.S. church in terms of attendance.

As the answers to those questions come forward, lay and clergy leaders from the Baltimore-Washington Conference are on the front lines.

The Rev. Ginger Gaines-Cirelli, lead pastor at Foundry UMC in Washington, D.C., is a co-convener of the UMCNext group. She said the gathering at COR brought together people to think about, pray about, and dream about the future of the church “that is not held hostage by the Traditionalist Plan.” 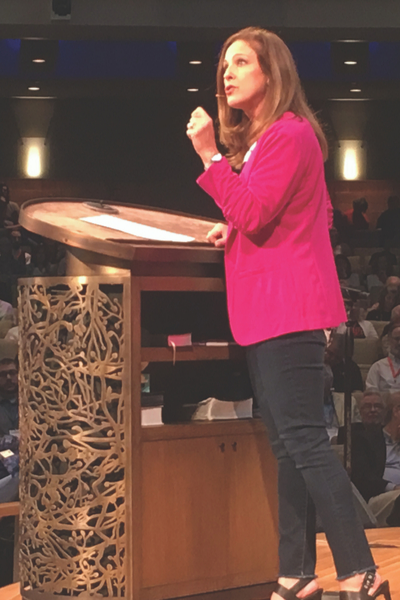 The 2019 General Conference approved the Traditional Plan, which keeps the “incompatible” language and reinforces the church’s ban on same-sex weddings and ordination of gay clergy. It goes into effect Jan. 1, 2020.

Gaines-Cirelli noted that the three-day meeting spent significant time addressing the historic injustices “that have yet to be fully cared for” in the church, including racism and sexism. Gaines-Cirelli addressed the gathering, speaking on women’s rights and sexism in the history of the church. She ended her segment by playing a North Carolina Conference video in which male pastors read aloud demeaning remarks their female colleagues had heard through the years.

“Women have to work overtime, sometimes for years, to get what men receive upon arrival – that is, simply, the honor of being taken seriously,” Gaines-Cirelli said.

She added that the denomination’s current struggles present an opportunity for a new commitment to attacking discrimination of all kinds, including against women in ministry. “I don’t want to waste a good crisis,” Gaines-Cirelli said, drawing laughs.

Addressing those historic issues is a critical piece for the church going forward, she said. “We need to address and get rid of the injustice and inequities and harm being done to our LGBTQIA siblings, and we need to make sure that we’re building a church that is truly equitable for all people, regardless of race, gender, orientation, identity, or ability,” she said.

UMCNext, an ad-hoc grassroots movement, is committed to a “Wesleyan vision of Christianity,” rejects the Traditional Plan, and commits to “resist evil, injustice and oppression in all forms and toward all people and build a church which affirms the full participation of all ages, nations, races, classes, cultures, gender identities, sexual orientations, and abilities,” according to its website.

Days before the COR meeting, leaders of UMCNext unveiled their package of legislation coming to the 2020 General Conference, titled “The Next Generation UMC Proposal.” Gaines-Cirelli said that there are four “buckets” for the legislation.

First, the legislation repeals the Traditional Plan. “It removes the harmful language that discriminates against LGBTQIA siblings and includes a moratorium on all new and pending complaint proceedings related to the implementation of the (Traditional) plan.”

The second bucket, she said, is that the legislation seeks to open opportunities for new expressions of Methodism. “This is a piece that’s different from the One Church Plan,” she said. “We recognize that we’re at a point where there will be people who will not want to participate in the next ‘thing’ as The United Methodist Church.”

The third bucket calls for reforming and revitalizing the church. “We believe that there is so much in The United Methodist Church that is beautiful and powerful and a gift to the world,” Gaines-Cirelli said. “We don’t want to lose that. Yet, we know that there is major reform that needs to happen. There’s repentance that needs to happen; there’s systemic changes we need to make.”

The last bucket seeks to ensure that no one is excluded from the ministry of the church.

The Next Generation UMC proposal is one of many circulating throughout the church which delegates will amend, debate, and vote on next May at the 2020 General Conference. Other proposals include the so-called “Indianapolis Plan,” named for where the conveners of that ad-hoc group met, which calls for “amicable separation.”

The Wesleyan Covenant Association, a “network of individuals and congregations who share a common understanding of our Wesleyan doctrine” and who are committed to “the primary authority of Scripture and the Lordship of Jesus Christ,” state on their website that they are focused on “Creating a uniﬁed response to the Bishops’ Commission recommendation that would maintain traditional, orthodox Methodist beliefs,” and “developing a plan for a positive and faithful future.”

They will be holding a Global Gathering, Saturday, Nov. 9, in Tulsa, Okla. A simulcast location for the event is located in the BWC, at Oakdale UMC in Olney.

The meeting included speakers on LGBTQ inclusion, such as Jan Lawrence, executive director of the Reconciling Ministries Network and a lay member at Foundry UMC. She is also on the convening team for UMCNext.

“My role on the convening team,” she said, “is to push them to be as inclusive as possible.”

Her takeaway from the event is that bringing about systemic change in the church is all about relationships. That, she said, is not a new learning for her.

Lawrence believes that this is a unique moment in the life of the denomination. “There’s so much tension that we react out of fear and panic and not thinking through something. So, the more we can have those conversations that ground us in our relationships and who we are as United Methodists, the better off we’re going to be.”

Pastor Dane Wood, a full-time licensed local pastor serving Grace UMC in Baltimore, came to this event to learn more about the future of the church. He left, he said, learning that there are a lot of moving parts.

Wood said that he’s hopeful the dreams will break out before the May 2020 General Conference. Grace UMC, he added, will be going through several of the plans within its church council over the next several months. Included in that conversation, he said, will be any possible resistance efforts to the Traditional Plan once it takes effect.

“We’re not inclined to abandon the conference or withhold apportionments or anything like that,” he said. “We want to be with the Baltimore-Washington Conference, but it is becoming increasingly difficult to remain in good standing considering the decisions that have been made.”

The Rev. Scott Bostic, associate pastor at Bethesda UMC, said his experience at the Leadership Institute was “mixed.” A powerful experience, he said, were the many times he saw or talked with people he has known throughout the years.

“Seeing all those folks come together and wanting to work for a better United Methodist church, that’s a more welcoming place, a more inclusive place, has been really exciting,” Bostic said. He added that he thought the vision of the Next Generation UMC proposal was “spot on.”

One of his concerns, however, was the proposal’s complexity.

Bostic said he had practically told folks going into the 2019 General Conference that “‘we’ve spent all this money; we’ve done all these resources, and things are going to get better.’ I believe in the vision, but I’m concerned about the cost, in terms of time, money, and the cost of people that we’re basically telling ‘hold on; we’ll get there in another five years.’”

The thing that brought him to COR, however, was Bostic’s 7-year-old daughter, Brooklyn.