When the catastrophes that recently struck Puerto Rico, Texas and Florida required an extraordinary response, the people of the Baltimore-Washington Conference rose to the challenge with more than $100,000 in relief and recovery funding.

On Sept. 20, Maria, a category 4 hurricane, struck Puerto Rico, leaving its residents without power, major damage to buildings and infrastructure, a critical shortage of food, water, and medicine and, in some areas, 30 inches of rain. 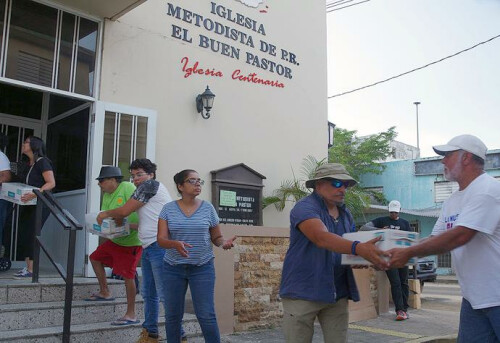 As Puerto Ricans began to clean up after the storm, local churches and individuals immediately began giving through the United Methodist Committee on Relief and directly through the Baltimore-Washington Conference, which in 2015 entered into a covenant partnership with the Methodist Church there.

Bishop Hector Ortiz of the Methodist Church of Puerto Rico attempted to speak a word of hope into the suffering, which was exacerbated by transportation issues to the island. “We are alive and we are standing in the fight,” he said. “With the strength of God's hope, we will rebuild Puerto Rico again.”

Meeting in a regularly scheduled meeting Sept. 27, the Baltimore-Washington Conference’s Commission on Finance and Administration (CFA) prayed for the BWC’s partners in Puerto Rico, those around the Gulf Coast and others affected by the hurricanes. They also decided to act, reported Phil Potter, the chair of the Commission.

Charlie Moore, a member of CFA, recommended using a portion of the Conference reserve funds to alleviate some of the difficulties and suffering caused by the hurricanes and begin recovery efforts.

After a financial analysis by the BWC staff, CFA members voted to contribute $50,000 to the Methodist Church of Puerto Rico designated for equitable compensation to support payment of salary and benefits to clergy during the disaster recovery.

They also voted to allocate $50,000 to the United Methodist Committee on Relief (#901670) to benefit all areas recently devastated by Hurricanes Harvey and Irma. Texas, Georgia Florida were struck extremely hard by these storms Aug. 25 and Sept. 10. Recovery efforts are expected to take years.

“The cumulative impact of Hurricanes Harvey, Irma and Maria created a ‘tsunami of need,’” Moore said. “We have not experienced a humanitarian crisis of this magnitude within our borders for a very long time. We are blessed as a denomination, and particularly as an annual conference, to have the financial resources immediately available to be able to deploy in this manner. UMCOR is positioned to prioritize and deliver substantial relief for both the short-term and the long-term. Our new covenant relationship with the Methodist Church of Puerto Rico also provides a reliable and transparent channel for our ministry of support.”

In making these missional gifts, CFA was careful to stay faithful to their role as stewards of Conference finances. Within this role, they oversee the reserve fund, which is kept at 10 percent of the Conference budget and is slated to go up to 15 percent in 2019. These gifts do not compromise the commitment to the reserves, Potter said.

“The creation of ‘reserves’ is a strategy utilized by our Conference to provide a pool of funds to respond to dramatic and unexpected events,” Moore explained. “These events could range from economic downturns to extended legal battles to responding to natural or humanitarian crises, to name a few.”

In the past, the BWC has contributed, from its reserves, $100,000 to assist with the building of the West Zimbabwe Annual Conference Mission Center, with whom the BWC has a covenant relationship, as well as a $500,000 gift to the denomination’s Imagine No Malaria Campaign, which raised more than $70 million toward the elimination of deaths from malaria throughout the world.

Moore, Potter and other conference leaders say they think it is important for our fellow United Methodists “in the pews” throughout the annual conference to have an understanding and appreciation for the depth and breadth of the impact of their weekly giving.

“The impact of their faithful giving through apportionments is now enabling our United Methodist connection to respond in this time of great need,” said Moore. “The members of your Council on Finance and Administration feel blessed to be able to respond this way.”

Ortiz and thanked United Methodists who are enabling local churches in Puerto Rico to continue to be open and in ministry.

“Our local churches have to be communities of hope,” he said. “The hope of the Gospel that is much more than optimism. The hope that comes from the participation in the construction of the new ‘mañana’ (tomorrow), when we can transform the reality that our people are living today. We are committed to that.”