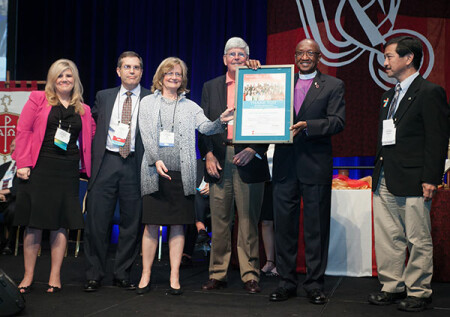 By a nearly unanimous vote June 2, members of the Baltimore-Washington Conference adopted a $14.2 million apportionment budget for 2017. The budget represents a decrease of 0.8 percent from 2016 and is the fifth consecutive year the apportioned budget has been between $14.1 and $14.3 million, according to the Rev. Ann Laprade, chair of the Conference Council on Finance and Administration (CFA).

Laprade celebrated the outstanding giving by the conference in 2015, with a collection rate on apportionments of 91.7 percent, the highest in 15 years. “We believe the collection rate is a good indicator of the strength of our conference,” Laprade said.

The 2017 budget, however, will not be a typical budget, Laprade said. That’s because the Conference Board of Pensions and Health Benefits found it possible to implement a “significant strategic shift in how we can fund Retiree Medical expenses in 2017,” she said.

The BWC has a surplus of $28.3 million in a fund created and set aside to pay for clergy who are under what is called the “Pre-82” retirement plan. Part of that surplus — $1.5 million – will be used in several ways in the 2017 budget. Part of the $1.5 million will be used to pay down debt on the loan for the BWC’s Mission Center in Fulton, and the new dining hall at West River Center.

“Four years of debt reduction at an average rate of $700,000 per year will shorten our loan from 13 years to 6 years, save $1 million in interest, and enable a 15 percent reduction in the budget at the end of the 6 years,” said Laprade.

The remainder of the $1.5 million will go towards replenishing reserves, providing needed salary and benefit increases, including the creation of a new position for a new Center for Clergy Excellence, paying increases in General Church apportionments, and other budget expenses.

In response to a question from the Rev. Barry Hidey about how long the surplus might last, Laprade said that CFA is taking a “conservative approach” to using the pre-82 surplus.

“We will be monitoring the levels,” she said, “and if there’s any reason not to do this, then we are under no compulsion to continue.”
Participants in the Baltimore-Washington Conference’s HealthFlex health insurance plan will have more options to meet their health insurance needs in 2017 under new provisions adopted by the Conference Board of Pensions and Health Benefits. The Rev. Jackson Day, chair of the BWC’s Board of Pension and Health Benefits, outlined the changes.

“There will be six options to choose from,” Day said. “The plan you select in November will define the premium you pay in 2017.”

Day said that the current BWC plan will be offered in 2017, and urged participants to attend orientation sessions that will be held in the fall.

Following the Stewardship report, the Rev. Melissa Rudolph raised the issue of health insurance costs for clergy couples with children. Melissa is married to the Rev. John Rudolph, and together they serve the North Carroll Cooperative Parish in Hampstead.

The next day, June 3, John Rudolph spoke passionately about the concerns he faced in paying for health insurance. The Rev. Deborah Scott, at Mill Creek Parish in Rockville, offered a substitute motion which was eventually adopted by the conference.

That motion called for an annual meeting between BWC staff and clergy couples to ensure that “all are enrolled” in the proper plan.

In other action, conference members: