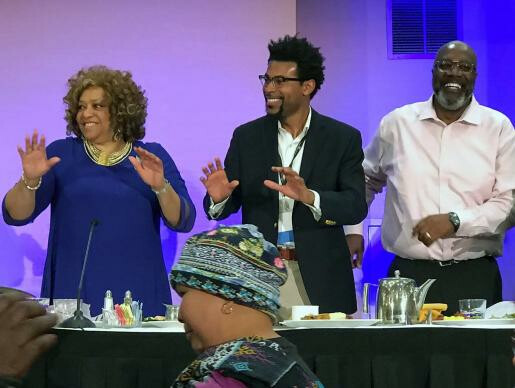 Black Methodists for Church Renewal recently gathered here in a mood of gratitude, but also of anticipation.

"We give thanks for the past 50 years … but God is declaring there is a next level in our future," said the Rev. Antoine "Tony" Love, the group’s vice chairman, to more than 225 of the organization's members attending a national meeting in Sacramento, California, March 14-17.

Love added: "God may be requiring us to leave behind the familiar. … God is saying, 'Make room for possibility.’”

BMCR is the organized black caucus of The United Methodist Church, one of the denomination's five U.S.-based racial-ethnic caucuses. The caucus represents more than 2,400 black United Methodist congregations and approximately 500,000 African-American members across the United States. 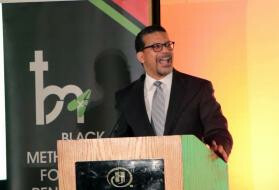 The theme of this year's conference was "The Journey Continues: Celebrating Our Faith, Hope, and Renewal."

“We may not know what the future holds, but we know who holds the future. We believe God and we take God at God's word," Love said in his address to the group.

“As United Methodists, can we not … be those who line up behind Christ Jesus who above all others shows us the way to that is truth, mercy, compassion, and justice?"

Deborah Dangerfield, BMCR chair, said the group continues to “pray and move forward” in advocating for the interests and inclusion of black people in general church structures.

“There is still much work to be done, in order to live out BMCR's vision and mission," she added.

During the meeting, members:

Instead of a traditional banquet, the meeting concluded with a multicultural/multiethnic gospel brunch featuring a Fijian choir, Tongan choir, Latina praise dancers, a Filipino choir and a choir singing traditional and contemporary African American gospel music.

The Rev. Anthony Jenkins, Western Jurisdiction BMCR chair, said, "Here in the Western Jurisdiction we … join together in oneness as the body of Jesus Christ. Our gathering on the last day of BMCR's national meeting exposed our consistency in coming together, in spite of prejudices."

The mission of BMCR is to raise up prophetic and spiritual leaders who will be advocates for the unique needs of black people in The United Methodist Church.

The group’s initial meeting in 1967 brought about 30 black Methodist leaders to Detroit. The group strategized and prepared for the end of racial segregation and the anticipated formation of the new United Methodist Church at the 1968 Uniting General Conference.

They planned a National Conference of Negro Methodists, which occurred in March 1968 in Cincinnati. When that conference ended, they had organized as Black Methodists for Church Renewal.

BMCR also helped the denomination launch numerous landmark mission initiatives, including the Black College Fund (1970), the churchwide missional priority on Strengthening and Developing the Ethnic Minority Local Church (1976 to 1988), and Strengthening the Black Church for the 21st Century (1996).

The list of ministries created, and continued, with the aid of BMCR, include Africa University, the Black College Fund, Gammon Theological Seminary the Minority Self-Determination Fund.

For more about BMCR, visit the organization's website, www.bmcrumc.org.

* is director of communications for the California-Nevada Conference which includes 370 United Methodist Churches with 73,000 congregants in Northern California and Northern Nevada. He is a member of BMCR.