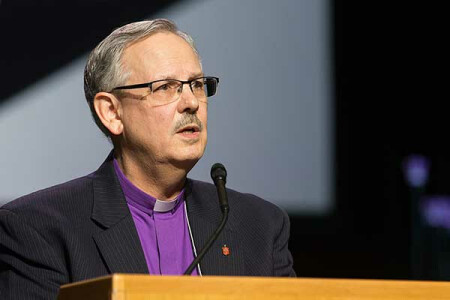 Bishop Bruce R. Ough, president of the United Methodist Council of Bishops, addresses the 2016 United Methodist General Conference May 17 in Portland, Ore., responding to social media posts claiming the church’s bishops are calling for a special General Conference in to discuss a possible split. Ough emphasized the bishops remain committed to the unity of the denomination. Photo by Mike DuBose, UMNS.

Bishop Bruce R. Ough, president of the Council of Bishops, said the bishops are not supporting any plan for a split of The United Methodist Church, but admitted they are not fully united on how the church should go forward in the face of differences over full inclusion of LGBTQ people.

He also indicated the door was still open to “new and innovative ideas,” perhaps even new structures. “We have risked exploring what many would consider radical new ideas,” Ough said in confirming that the bishops had been meeting with both conservative and progressive groups.

“We remain in dialogue, so much of who we are is working, yet so much to adapt to new realities,” he said. “Come Holy Spirit and break through and set us free,” he prayed. “We belong to God and one another.”

Ough the 2016 General Conference after social media posts claiming The United Methodist Church will hold a meeting in 2018 to discuss a possible split.

The social media posts from Love Your Neighbor and other groups that advocate for full inclusion said a major part of the proposal was to immediately halt the processing of complaints against LGBTQ pastors or clergy who perform same-sex marriages.

Doug Damron, a West Ohio delegate, wrote on his Facebook page that West Ohio Bishop Gregory Palmer and the Rev. Mike Slaughter, pastor of Ginghamsburg United Methodist Church in Tipp City, Ohio, told the delegation that the bishops have been gathering privately with leading pastors and caucus leaders around how the church can move forward in regard to gay and lesbian inclusion.

“This has been a very emotional evening, an evening of tears, laughter, and hope,” Damon posted.

Bishop Marcus Matthews, leader of the Baltimore-Washington Conference,  sent a statement denying the plans for a split.

“Many of you have been hearing rumors that the bishops of our church are discussing a split in our denomination.  That is not true.  We, the Council of Bishops, are committed to unity in the church,” Matthews said.

Bishop Grant Hagiya confirmed to  Western Jurisdiction delegates that the bishops had been meeting.

But Hagiya, leader of the Greater Northwest Episcopal Area, said there was ” no movement to separate from our standpoint … Our conclusion was we have to stay the course and seek the unity of the whole church.”

Leaders of the Love Your Neighbor Coalition UMC tweeted to their team that the Council of Bishops working on a presentation to the delegates later this morning.

“They are proposing a 2018 special session to discuss a means of separation and no processing of LGBTQ-related complaints or punishments between now and then,” said Steve Clunn, Love Your Neighbor director.

A statement from Good News confirmed the bishops have been holding conversations with several coalitions on the seemingly “irreconcilable differences” over the inclusion of LGBTQ people in the church. The initials stand for lesbian, gay, bisexual, transgender and queer or questioning.

“The conversations reached the point that the Council of Bishops was considering their role in moving the process forward,” said the statement from the leading evangelical group in the church.

“While we were waiting for the response of the council, some in the progressive movement last night broke the agreement of confidentiality by publicizing something that had not been formally proposed,” the statement said.

“We are still waiting for the response of the Council of Bishops. We will attend another meeting today to see if the bishops are willing to propose anything,” the statement said.

A split has been discussed around the edges of General Conference before.

Gilbert is a multimedia for United Methodist News Service in Nashville, Tennessee. Sam Hodges contributed to this report.