By Erik Alsgaard and Beth DiCocco* 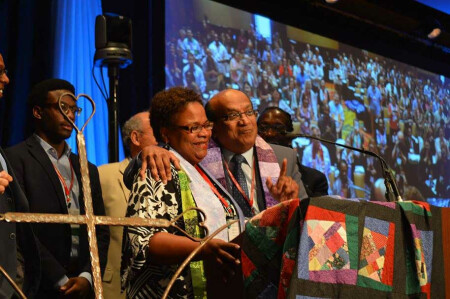 Bishop LaTrelle Easterling has been assigned as episcopal leader of the Baltimore-Washington Conference, effective Sept. 1. Easterling becomes the first female bishop in the 232-year history of the BWC.

Easterling was elected as bishop by the Northeastern Jurisdiction on July 14, the second bishop elected.

“As you might imagine, my heart is full,” said Easterling during a brief introductory meeting Friday morning at the Lancaster Marriott Hotel. “I am just overwhelmed with joy; I mean, sheer joy at the fact that I am coming to walk in ministry with you. This is new to us, but it is not new to God. God had this planned, and God is just unveiling it for us today.”

If God had planned this, she said, then God has other things planned “for us.”

“As we get to know one another, if we can just trust that spirit of God, right, then the mountain tops are just going to be sweet; the valleys are going to be bearable, and we’ll get through all of it with the joy of our Lord and Savior, Jesus the Christ.”

The bishop, along with her husband, Marion, stood in the middle of a circle of BWC clergy and laity, gathered at the hotel.

“I am what you call a ‘baby bishop,’” Easterling said. “I am going to offer you the very best of myself. I hope that, as I’m learning, that if I misstep here or a have a little problem there, you will offer me the grace to allow me to grow into the fullness, the full weight of this leadership position with you.

“And I will offer you grace,” she continued, “that will be necessary as we learn to walk this journey together.”

Easterling, who was the first female pastor of the last church she served in the New England Conference, said that she is fully aware of the historic significance of her election and assignment.

The bar has been set high for us, she said, “and we have to keep making history. Do not think that it is lost on me that this is the strongest conference in the Northeast Jurisdiction. But God wants to take us higher and further. I am not afraid of getting dirty. I am not afraid of getting a little nicked and bruised for the glory of God. I am ready, with you, to run on to see what the end shall be.”

The new bishop was given gifts from the BWC’s Episcopacy Committee and Episcopal Office staff, including a new, pre-loaded iPad with transition information about the conference.

Easterling most recently served as superintendent of the Metro Boston Hope and was named dean of the cabinet in June.

In introducing his newest colleague on the United Methodist Council of Bishops, Bishop Sudarshana Devadhar called Easterling “a prophetess, a pastor who leads the church from her spiritual center, and above all, a beloved sister in Christ who always, always has a passion for the marginalized.”

Easterling told the member conferences of the Northeastern Jurisdiction that no matter where it is, “If God sends me there, I will never look back.”

“I always, always, always stand on the side of justice,” she said, “but I draw the circle wide enough for all of us to be there – and when I say all, I mean all.”

She became district superintendent in 2012, succeeding the late Martin D. McLee, who was elected bishop that year. She has followed McLee’s path to the episcopacy having served as pastor of Union United Methodist Church in Boston and then as superintendent of the same district he had served.

An Indianapolis native, Easterling, 51, told those at the jurisdictional meeting about a Friday night when she was 16 and sitting in the back of her hometown church.

“All of a sudden something started tingling in me,” she said, and her peers asked what she was doing as she moved toward the front. “There was a hand that guided me down that aisle and I gave my life to Jesus Christ and I have never looked back.”

Easterling admitted that she “tried to run” from the call to ministry, “but God was faithful,” and for five days woke her at 3:33 a.m. to say: “Preach My Word.”

She said the Scripture that has carried her through the election process is Jeremiah 12:5, and displaying her gifts as a preacher, said:

She was a delegate to General Conference in 2012 and and served on the NEJ’s Multi-Ethnic Center Board. She also served on the conference board of ordained ministry.

Easterling earned her bachelor’s degree at Indiana and her law degree from the university’s School of Law. Before entering full-time ministry, she worked as a mediator and as a Human Resources Manager and Director.

She is married to the Rev. Marion Easterling, Jr., the pastor of Parkway UMC in Milton, Massachusetts. They are the parents of two sons, Garrett Walter and Miles .

But getting to know one another can change that, she said.