Around Ash Wednesday, a pastor’s thoughts naturally turn to spotted turtles. Wait. What?

As I prepared for Lent this year, those preparations included ashes for worship and an incubator for turtle eggs. Working part-time as pastor of Solomons UMC and aquarist assistant at the Calvert Marine Museum, this marine biologist minister often has an eclectic To Do List any given week. The beginning of Lent this year was no exception. The spotted turtles at the museum had been mating, and we came in one day to find two elliptical eggs in the tank. The female had laid them in the water, which is not typical; females dig a nest on land with their hind legs. Without knowing if the eggs were even fertilized, let alone still viable after being submerged, we decided to put them in an incubator we had on hand.

I researched the incubation period for spotted turtles, which is the amount of time the eggs remain and develop in the nest. For spotted it can be around six weeks. “That means they will hatch around Easter,” I told the aquarist. “The odds aren’t good,” she said, “so I wouldn’t get your hopes up.” I responded, “We are talking about Easter. Getting our hopes up is exactly what it’s about.”

Lent came and went, and Holy Week brought its usual worship, reflection focus, which is to say I forgot about those two tiny white eggs tucked into the incubator. On Easter Monday, I was recharging my spiritual batteries caring for the creatures at the museum, when the aquarist said, “Dottie, stop whatever you are doing and come here now.” No, it is too soon after Easter to do anything quickly, I thought, until it occurred to me, Yes, it is Easter Monday, the perfect time for a turtle miracle! (Isn’t that what all pastors think?)

And it was. The lid of the incubator was lifted back when I got there, with an empty turtle shell inside. One of the turtles had hatched, and the other was just beginning to. At about an inch long and with bright yellow spots, the hatchling was surveying her new world around her. The life that had been developing and growing and persevering in the dark burst forth into the light. And everyone there who saw it, regardless of his or her faith or lack thereof, proclaimed the same thing – “It’s an Easter miracle!” 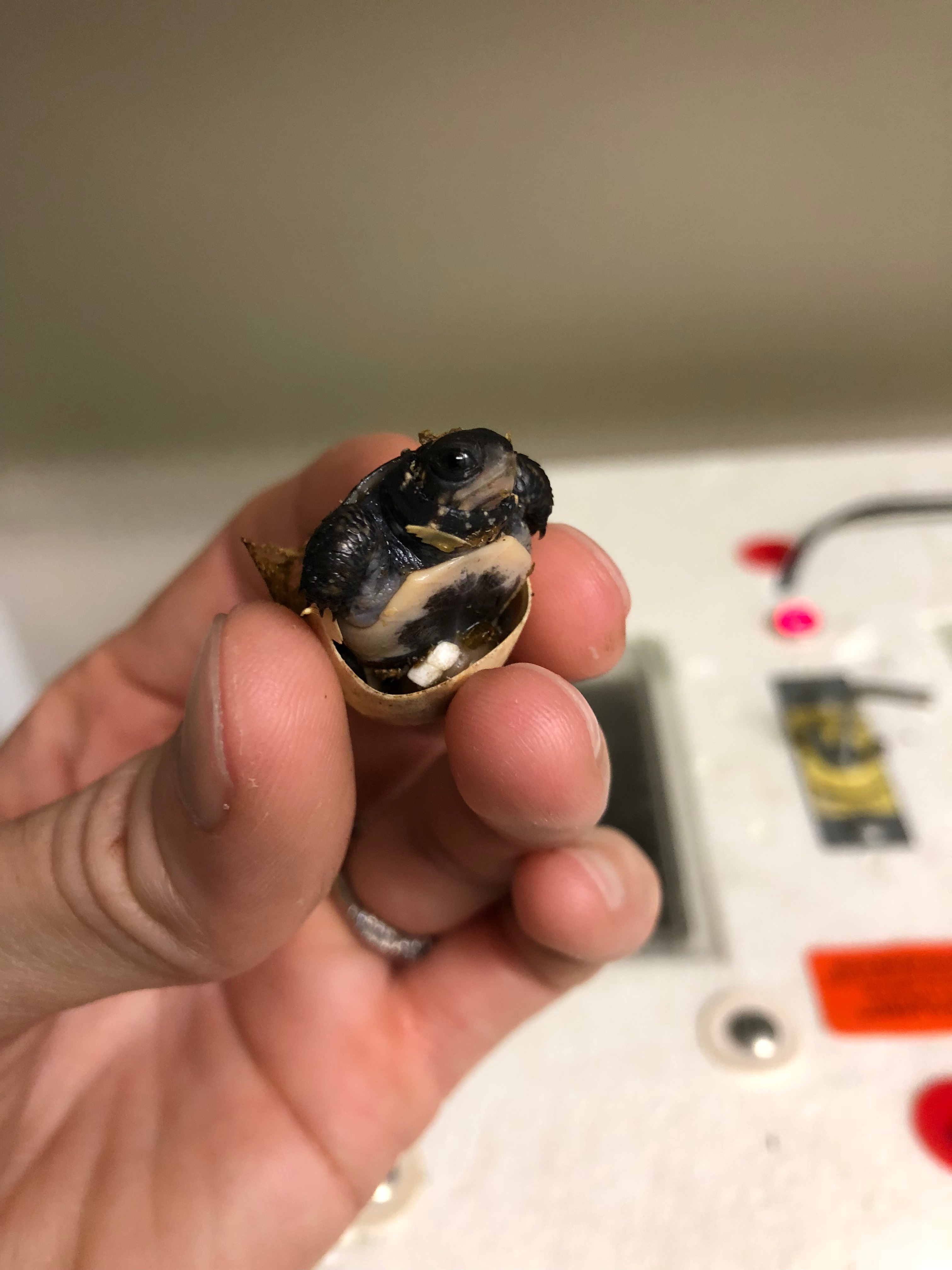 I never imagined a tiny turtle would be such a powerful evangelist. But that’s what Dash – that’s what we named her – was that day. By the next the second turtle hatched, though more slowly and some help from us. Her spots were even more pronounced, and we named her Dot (a proud day for me). A spotted turtle can have over 100 spots, and no two turtles’ spots are the same. Each is a unique, individual, one-of-a-kind creature (that will preach).

Why work at the Calvert Marine Museum, and why spend Easter Monday there instead of resting from Holy Week as pastors do? Why ponder the theological significance of a baby turtle? For me, because this is the call God has placed on me; this is the ministry to which I am called. To care for God’s creation, all of it, all of us. To consider God’s people and the sparrows and the lilies, and to pastor to them all. Both my theology and my ecology studies inform this ministry to all of God’s creation.

In his article, “Consider the Turtles of the Field,” Brian McLaren describes emerging theological values that we all might embrace, not just marine biologist ministers like me. They are:

Those values, and the correlation to ecological include:

After Dash hatched, I gently picked her up and placed her in the palm of my hand. Spotted turtles are semi-aquatic, and it was time to introduce her to water. I poured a small amount my cupped hand and watched her reaction. She put her head under the water and looked around, then began to move around in her new watery environment. Yet another entirely new way for her to view her world. As she did, I considered this turtle of the stream, this creature of God, and I whispered, “I now baptize you in the name of the Father, and of the Son, and of the Holy Spirit.”

*The Rev. Dottie Yunger is pastor of Solomons UMC in Solomons.