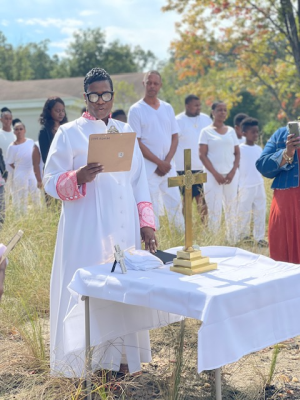 Miracles happens, and sometimes they surprise us.

During the pandemic, the Rev. Gay Carden pastored sick people and led the funerals of those who died. “There was a darkness in the pandemic,” she said. Recently, she also found the light.

On Sept. 15, Carden, pastor of Asbury UMC in Jessup, stood in the waters of West River, baptized 9 people, and reaffirmed the baptism of four others.

“It was in August when I eulogized a member of the church and a young man walked up to me at the graveside and said he wanted to give his life to Christ, Carden remembered. I was able to extend the body of Christ to this young man and he asked to be baptized.”

Thinking that others might want to join him, Carden made a flyer. It said, “And Peter said to them, ‘Repent and be baptized every one of you in the name of Jesus Christ for the forgiveness of your sins, and you will receive the gift of the Holy Spirit.’” (Acts 2:38). 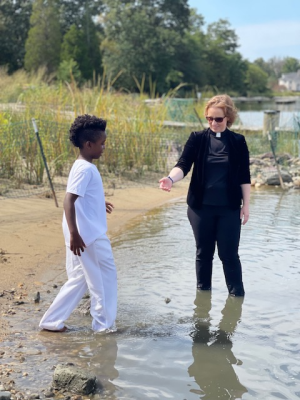 More people came forward. On that morning at West River, “We had three sisters whose dad is incarcerated, two brothers who lost both parents at the tender age of 2 and 6 years old, a young man who saw the flyer on Facebook, and then we had four parishioners who just wanted to reaffirm their baptism,” Carden said.

After the baptism, the family of Asbury UMC sang gospel music and had a hearty Sunday cookout. The theme of the worship that day was “I left it in the water,” Carden said. “One of the teenagers when she came out of the water, threw her hands up and said, ‘I feel so much better that I left all that I was carrying in the water, and now God is carrying me!”