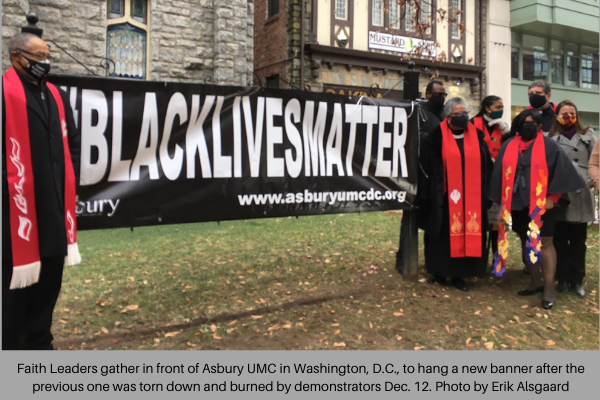 After demonstrators tore down a Black Lives Matter banner from the front of Asbury UMC last weekend and then burned it in the street, more than 400 clergy, laity, and faith leaders gathered on the front steps of the church, and virtually, to put up a new one.

In a Service of Prayer and Solidarity, Bishop LaTrelle Easterling of the Baltimore-Washington Conference, and Asbury’s lead pastor, the Rev. Ianther Mills, along with others, offered a powerful witness to the fact that those who intended hate and harm do not have the last word.

“We are here because we are followers of Jesus Christ,” said Bishop Easterling. “Asbury United Methodist Church raised a banner to stand in solidarity with Jesus the Christ’s ministry of setting the oppressed free. That banner was removed by trespassers who then employed the historic act of using fire to intimidate and terrorize Black and Brown people into silence.

After the service, Mills said that she was grateful for the support.

“I am grateful for the support and outreach of the community, the United Methodist community and beyond,” she said. “My heart is just full from the love, the outpouring of support. It tells me that many people stand in solidarity and not only believe that Black Lives Matter, but are willing to work for that to be a reality.” 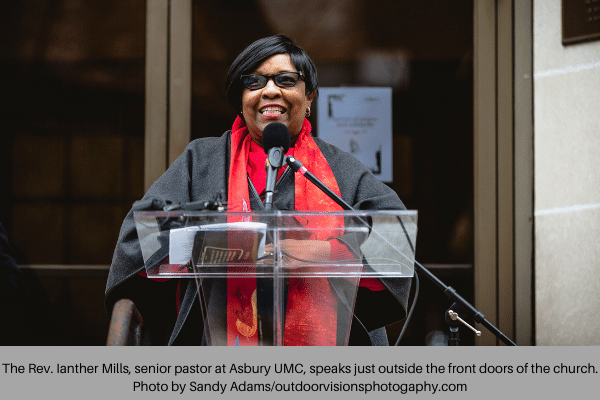 Bishop Easterling issued her own statement about the vandalism on Dec. 14, saying that "... although we denounce in the strongest terms the vandalism that occurred at Asbury UMC, we still seek to be in conversation with all people to work toward understanding, reconciliation, and peace." Read Bishop Easterling's full statement from the Prayer Service at https://www.bwcumc.org/news-and-views/hope-justice-love-will-prevail-bishop-proclaims/

A social media video from Dec. 12 showed the church’s Black Lives Matter banner being burned in the street. As demonstrators surround the flames, they chanted obscenities. Similar vandalism happened to at least three other DC churches that night, including Mount Vernon Place UMC in Washington, and Metropolitan African Methodist Episcopal Church. No arrests have been made in any of the incidents, which police are calling hate crimes.

“We are renouncing evil,” she said at the prayer service, quoting her bishop, Bishop Leila Ortiz. “We are denouncing domestic terrorism in our midst.”

“We are blessing this banner,” she said, “as a visible sign of our commitment to Black Lives Matter.”

Go to bwcumc.org/justicenow to learn more about how our faith informs our work,
ways that you can offer your voice, and be the beloved community.

Sign the commitment today to be an anti-racist church.

The Rev. David McAllister-Wilson, president of Wesley Theological Seminary in Washington, noted the long-standing ties between the school and Asbury.

“We stand in solidarity with the Rev. Dr. Mills and Bishop Easterling at this moment,” he said.

McAllister-Wilson noted that there is a struggle and a competition going on in the city and in the world between two kinds of pride. One kind of pride, he said, are some boys “who look a lot like me, … led by a ring-leader who cannot be charged but who, nevertheless, instigated this act. Strangely, I don’t see his helicopter above this gathering this morning.”

Instead, McAllister-Wilson said, the people gathered at Asbury came with pride in something completely different.

“Pride, that comes from the humility of love of God and love of neighbor. Pride that understands what it means when we say, ‘Black Lives Matter.’” 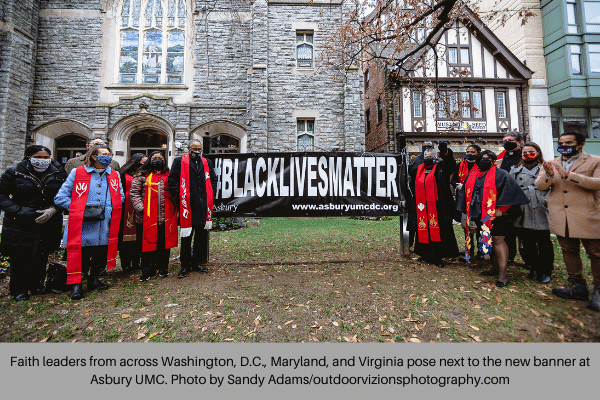 Rebecca Cole, on staff at the United Methodist church’s advocacy and action agency, the General Board of Church in Society, brought a greeting from the Rev. Susan Henry-Crowe, its General Secretary. Henry-Crowe, Cole said, often worships at Asbury.

“Igniting fires of hatred, fear, white supremacy, abuse, and violence are antithetical to the Christian message of Justice,” Cole said. “We condemn these acts as sin.”

She then offered a powerful lament for racism, not only in the community but in The United Methodist Church as well.

“In United Methodist history,” she said, “although the founder of Methodism spoke out and stood against slavery and the slave trade, American colonies and what was first the Methodist Episcopal church continued prioritizing the economic advantage of slavery.”

Cole then noted the division of American Methodism before, during, and after the Civil War, especially noting the racially segregated Central Jurisdiction.

“This expression of white supremacy, joining but racially segregating, was at the time celebrated as unity,” she said.

The reason for the brief history lesson, Cole noted, was because the whole truth needs to be told.

“This history is a less obvious yet critically important struggle that makes today an even more urgent time for us as a Church and society, to say Black Lives Matter, and live in the way that Black Life Matters.”

The Rev. Thomas Bowen, who serves as the Director of the Mayor’s Office of Religious Affairs in Washington, spoke on behalf of Mayor Muriel Bowser and the citizens of the nation’s capital.

“My day started early last Sunday,” he said. “And that day has not ended. There were no permits issued for those who came into Washington, D.C., with their hate. Permits have not been issued during the pandemic, and most protests involve permits issued by the Federal Government. But times are changing.”

Bowen said that the mayor wanted people to know that Washington, D.C., is a city of love, inclusion, and diversity.

“And we know that people who come here to sow seeds of hate and division are wrong,” he said. “So, as a community, we denounce them.”

Go to bwcumc.org/justicenow to learn more about how our faith informs our work,
ways that you can offer your voice, and be the beloved community.

Sign the commitment today to be an anti-racist church.