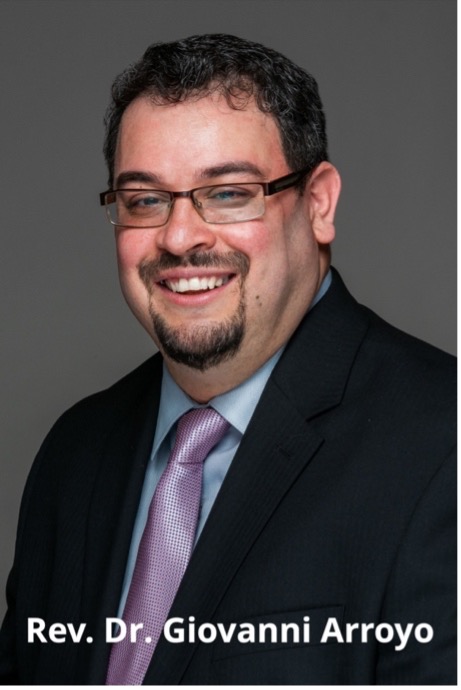 The Rev. Dr. Giovanni Arroyo, an ordained Elder and member of the Baltimore-Washington Annual Conference, has been elected as the General Secretary (chief executive) for The United Methodist Church’s General Commission on Religion and Race, effective August 31.

Bishop Cynthia Moore-Koikoi, president of the Commission’s board of directors, made the announcement July 6.

“The board cannot wait to see how God is going to use the tremendous gifts God has given Dr. Arroyo as he takes the lead chair of the agency. His experience, talent, and lifelong commitment to the work of dismantling racism are invaluable at this critical juncture in the life of the church and the world,” the bishop said.

(English translation: “I give thanks to God for the leaders that have been part of my formation so that today I can lead GCORR to its next phase of racial justice work globally. I ask for your prayers so God can be manifested in all that we do.”)

The Rev. Dr. Arroyo has worked for the Commission as Team Leader for Monitoring and Advocacy, and since 2013 as Team Leader for Program Ministries. Born in Puerto Rico and raised in New York City, he started professional ministry in 2001 as pastor of Iglesia Metodista Unida El Camino and served as one of three chaplains caring for families, victims, and survivors of the 9/11 terrorist attack on the World Trade Center. He was at Bellevue Hospital where 287 survivors received medical care following the attack, and also comforted family members at the city morgue.

The Rev. Dr. Arroyo previously served cross-racial/cross-cultural pastorates in both New York and Baltimore-Washington conferences, while also leading Religion and Race and Hispanic-Latinx ministries. Before becoming ordained, he was a researcher at The City College of New York in language acquisition and experimental psychology. He did further research at the New York State Psychiatric Institute on exposure to violence and child abuse and at the National Development and Research Institute with young adult drug users. He also served as adjunct faculty, teaching English as a second language and world religions.

Deaconess M. Garlinda Burton, who has been serving as interim executive during the GCORR board search process, also applauded Dr. Arroyo’s election.

“Giovanni is one of the most potent United Methodist voices for racial justice, not just for the church in the United States, but across our worldwide communion,” Ms. Burton said. “To elect him Religion and Race’s General Secretary in this moment gives me assurance that this Commission’s work of helping build God’s just and peaceable kin-dom will move to its next great level.”

Congratulations! May you boldly embrace what God offers you in this new season

May God bless the work you do. And may the light of God's love continue to shine through you.


Congratulations. Giovanni! May God of all nations and races be with you as you bring the gospel of Jesus Christ to all of lives.