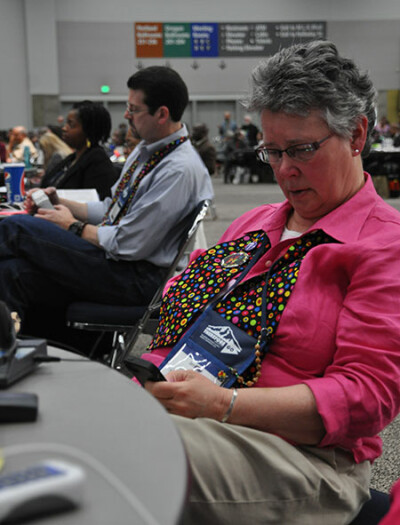 Late in the afternoon of May 18, delegates voted by 428 to 405 to accept the recommendation of the Council of Bishops to delay a debate on homosexuality at this gathering of the denomination’s top legislative assembly and let a proposed commission study church regulations. The Council of Bishop’s proposal, which came in response to cries from the floor for the bishop’s to lead, calls for a potential General Conference in 2018 or 2019 to deal with the study commission’s report.

During the debate on the bishop’s proposal, moment took place as Jen Ihlo, a lay delegate from Dumbarton UMC in Washington, D.C., and part of the Baltimore-Washington Conference delegation, asked for the presiding bishop to remove himself from the chair due to what she considered improper rulings. Long-time delegates and attendees to General Conference could not recall such a motion ever having been made in the life of The United Methodist Church.

Bishop William McAlilly of the Nashville Episcopal Area, who was chairing the plenary debate, immediately called for a 10-minute recess. After the recess, the Committee on Presiding Officers announced that, in the best interest of the General Conference, Bishop McAlilly would stay in the chair.

frustration grew out of her experience as she and others in the BWC delegation began to sense that the leadership being offered might be affecting the voting. An expert parliamentarian and chair of the Rules Committee for the BWC, Ihlo had lined up in the queue to address what she considered some improper rulings. McAlilly acknowledged but continued to make parliamentary missteps.

At one point, Ihlo turned her chair around in silent protest, removing herself from the proceedings she questioned. But because of a glitch in the queuing systems, she heard her name and the bishop calling her to come to the microphone.

She rose and, with tears in her eyes, asked the bishop to step down and allow another bishop to preside.

During the recess, people stopped by her table to chastise Ihlo for her “disrespect” and “hurtful” approach. Ihlo left the plenary floor, in tears.

During the break, Ihlo told United Methodist News Service that the bishop “totally confused the body on the votes.”

Before Ihlo spoke to the plenary, the Rev. Gregory Gross, a delegate from the Northern Illinois Conference, accused McAlilly of trying to telegraph votes by shaking one finger or two as he addressed the delegates.

However, McAlilly called and Gross’ accusations “the craziest thing I ever heard.”

“I was holding a pen part of the time and trying to write notes,” he told UMNS. “That’s the most absurd thing I’ve ever heard, frankly.”

Several General Conference delegates acknowledged that remarks assisted in the passage of the Council of Bishop’s “Way Forward,” which offers measures for the church to address issues of human sexuality.

They intend to bring the findings and suggestions to a specially called two- to gathering before the 2020 General Conference.

The Council also encourages “continuing discussions to explore options to help the church live in grace with one another – including ways to avoid further complaints, trials harm while we uphold the Discipline.”