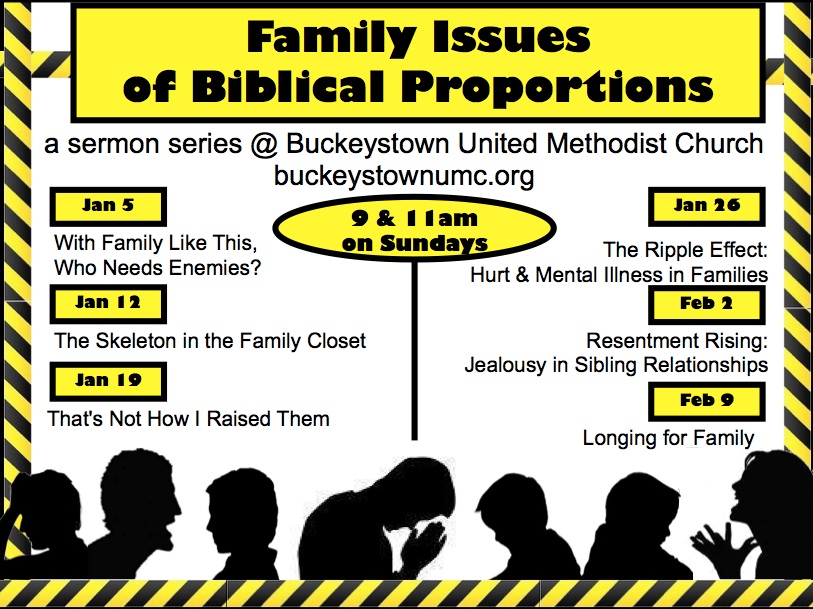 Series designed by the Rev. Emily Berkowitz. The graphic is in a power point format and can easily be edited to be used in your church. Download PPT file here.

Description: For families in our culture to understand that dysfunction also happened in the biblical witness and how God speaks life and hope into the chaos of family life.

2 Sam 15:1-16
This week will start off with an intro to this series. Many of us wish for picture perfect families out of 1950s television shows, but way back to the bible, there are no perfect families (in the first set of brothers, one kills the other). We'll do a brief overview of dysfunctional families in the Bible.

Then we'll look at the story of King David's family. King David is said to be the "man after God's own heart", but his family is probably the most dysfunctional one in the Bible (or maybe it just seems that way because there is more written about this family than any other).

This week, we're going to focus particularly on the end of the book when David's son Absalom (who murdered his brother Ammon for raping their sister Tamar) usurps the throne from David. No sooner has David forgiven Absalom for murder and allowed him back into the royal household, than Absalom begins to turn people against his father. They began to declare Absalom king, and David had to flee for his life. And yet...David tell his army that whatever they do, they are to deal gently with Absalom. When his son is killed, David mourns his death deeply.

Prayer of Confession:
God, Creator of all People:
Lord, this day we confess that sometimes it is hard to get along with others, even sometimes with our own families. We want our own way, we want others to do what they are supposed to do and when it doesn't happen, our own pride gets out of control. Our own sense of self-righteousness kicks in and we become disgruntled and ungoldy. God empower us, through your Holy Spirit, to let go of that which is not ours, and remind us time and time again that you have a plan, a better plan; to live in peace and harmony with one another. Allow us to see others through your eyes, that we were all created in your image. Give us a sense of love and purpose for all your created peoples. Amen

Call to Worship:
L: We gather in the house of the Lord to give thanks and praise.
c: Yet even while we worship, often we mourn that which was not to be.
L: We often cry out in grief like King David, "Absalom, Absalom, My Son!"
c: We do not understand the hurts and trials of this world, so we cry out.....
L: Yet Lord, even in our cries, we know you hold us in the palm of your hand.
c: Come Lord, Creator, Redeemer and Sustainer of Life.
all: Fill us anew, with your sustaining love and remind us again of the gift of life, relationships and love that you give to us all.

Even Jesus' family history included scandal. Matthew's Gospel begins with his genealogy, and that includes some colorful characters.

One of them is Tamar. Tamar was in a desperate position. Her husband died and she married his brother, who died. Her father in law promised her his next son, but didn't come through. So Tamar dressed as a prostitute, and her father in law slept with her not knowing who she was. She got pregnant by him, and when he found out that she was pregnant, he wanted to have her killed- until he found out that he was the one who had impregnated her. Then he declared that she was more righteous than him. Tamar gave birth to twins, and one of them is in the lineage to King David, and therefore in the lineage to Jesus.

Is the story of Tamar shameful? Or was it more shameful that she was in a position of desperation that forced her to make that choice? Sometimes decisions are complicated. Tamar and other people (esp the women) in Jesus' genealogy behaved in ways that would be judged scandalous, but they are not left out of Jesus' lineage (in fact, they are intentionally included). They are part of the family through whom God worked to bring salvation. God works through scandalous people!

Proverbs 22: 6 says: Train children in the right way, and when old, they will not stray. This is well known, but is it true? How much do we have the ability to "train" children?

The priest Eli was an old man whose entire life had been dedicated to serving God in the temple. He was a righteous man. Now he was old and couldn't see though, and one of his sons should have taken over for him, but they were "scoundrels" with "no regard for the Lord or for the duties of the priests to the people." 1 Sam reports that "the sin of the young men was great in the sight of the Lord."

Poor Eli was hearing all the evil things that his sons did from other people, but his sons "would not listen to the voice of their father."

Eli can not save his sons from the consequences of their behavior, and his biological line was cut off, but it was Eli who raised and nurtured Samuel from boyhood to be a prophet of the Lord. Eli suffers from the behavior of his children, but nothing indicates that God thinks he's raised them the wrong way- in fact, Eli is entrusted to raise God's prophet Samuel. Eli's sons made their own choices....

This week is going to look at the idea that a family is a system of connected people, and when something goes wrong for one, everyone close them hurts. I'm going to start with this in a broader view and then bring it around to deal with mental illness, which affects a lot of families and doesn't get talked about enough.

What the biblical writers call "evil spirits", today we would probably call mental illness. Saul was the first king of Israel, but he was no longer listening to God, and God had told him that there would be a new king of Israel. Now Saul was tormented by an evil spirit. When crowds begin celebrating David, Saul goes from being tormented to going after David trying to kill him. Saul's son Jonathan is David's closest friends, and his daughter, Michal, is David's wife who helps him flee. Everyone around Saul suffers from his distress and behavior.

In the Matthew passage, a mother comes to Jesus shouting "Have mercy on me, Lord, Son of David; my daughter is tormented by a demon!" This woman was a gentile, but she actively and persistently seeks Jesus out begging for help. When he first refuses her, she persists. She is desperate for help for her daughter- they are both suffering.

The story of Ruth begins with Naomi's husband dying, followed by the death of her two sons. Not only is this sad, but it leaves her desolate. Out of care for her daughters-in-law, Naomi suggests that they return to their parents' homes and perhaps they can remarry and find security. Orpah takes this advice, but Ruth clings to her mother-in-law and promises to stay with her, opting out of security to share a future with her mother-in-law. They become a new family, caring for each other.

Boaz, seeing Ruth's kindness, provides for her and takes on the role of kindred redeemer. Boaz and Ruth marry and become the great-grandparents of King David, in the line of Jesus. Ruth, once desolate with no one other than the mother-in-law she had chosen to accompany, is now part of the great family story and recalled in all the genealogy.

In the Gospel passage, Jesus also talks about a new idea of family. Who is his mother and who are his brothers? Those who share in his purpose who are committed to living out God's call and working for God's kingdom on earth. Uniting in this mission, we are all including in God's family.